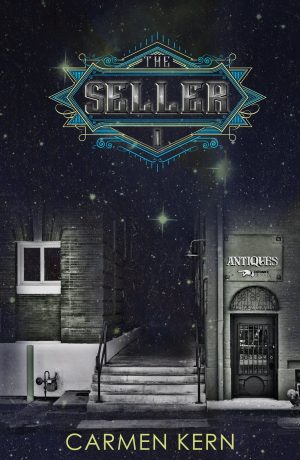 THE SELLER SWORE NEVER TO STEAL HIS DEAD WIFE BACK FROM THE ARMS OF THE UNDERWORLD. THAT WAS BEFORE SHE SHOWED UP IN THE BODY OF A FRANCISCAN NUN…

He’s called the Seller. Purveyor of weapons, curses, and blessings. Giver of vengeance, pandemonium, time and nightmares. The discontented seek him out, barter their wares, and sometimes their souls.

In the wake of the Changing, there are many who seek his powerful artifacts for revenge, for love and death.

Times are strange indeed, as a Franciscan nun from a faraway world knocks on the Seller’s door, claiming his dead wife and other lost souls from across the galaxies possess her. He is the only one who can help them find rest.

Compelled by more than the nun’s words, the Seller becomes the conduit for the wandering dead to find their resting place. And in the process, he tastes the essence of his dead wife, discovers a power he didn’t know he had, and gains an unusual roommate. One he knows little about. One who will threaten his immortal life, though he doesn’t know it yet.

This is Episode 1 of the serial fiction, The Seller. A futuristic, action-packed series full of magicks, tricksters, and an immortal shop-keep compelled by the prophecies of his dead wife.

GRAB YOUR COPY OF THE SELLER TODAY!