Secret of the White Beast

The sun touched its fingers on the mountain tops as I found the cave. It was steamy and damp. The air fluttered with dust mites and flies. In the distance, I heard water running. In my mind, the cave would pulse with a thousand black wings as I’d trudge through layers of droppings, or a mighty hammer of some ancient god would fall from the sky to crush me, but there was nothing like that. The sun found its way through a cavernous hole above, glowing warm against the rocks, lighting them up like bars of gold. Something was in there, waiting.

I clutched the rope in my hands; it felt real and ugly in this place. “Show yourself!” I meant to shout, but it slipped out as a whimper.

The trees shuddered and split as a ghost of a beast appeared and picked its way across the rock, spreading light and warmth into the very cracks of the cave. You trespass. Leave the way you came. It spoke to me as one should not be able to, within my mind. It was an old and lonely voice. I stood there, not able to move.

A breeze swirled at my feet, stirring up dirt as the weeds and grasses danced. The water shone like jewels in behind the beast and for one who has never believed in magicks and myth, I found myself lost in the very center of such a thing. This was a beast of legend. Its hide would fetch more gold than I or my children could ever spend. And yet, I could only watch as the rope in my hands withered and turned to dust. My sword and knives fell useless to the ground, sinking into the marshy landscape as grass and rock covered hilt and blade.

The beast said nothing more but melded into the light until I stood alone in the growing darkness. The sun dipped in the sky and I could no longer feel its warmth in the cave. Time passed. I followed the path I had taken in and made my way down the dark mountain. I never told a soul about the mythical beast, not until this moment. Seems to me that now is the time to believe in such things… 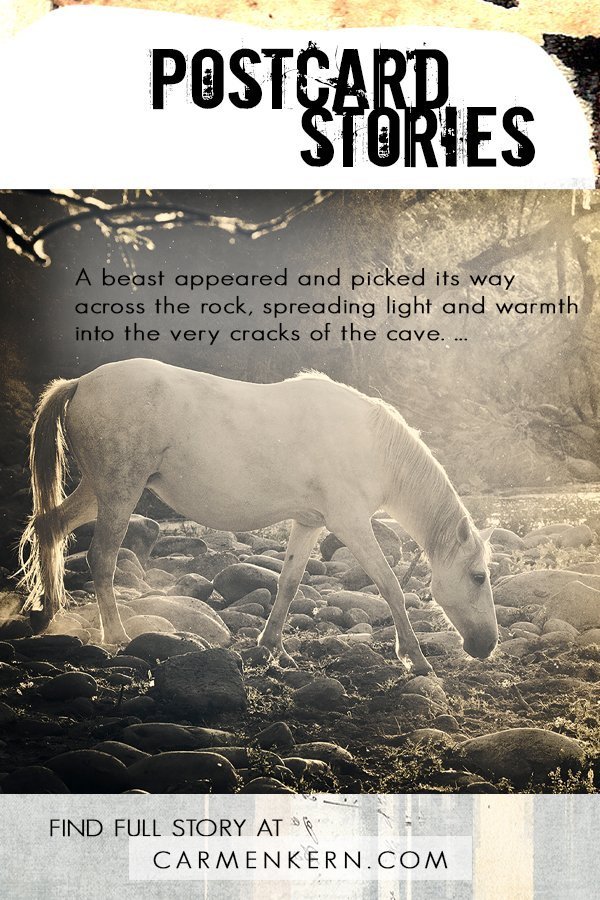