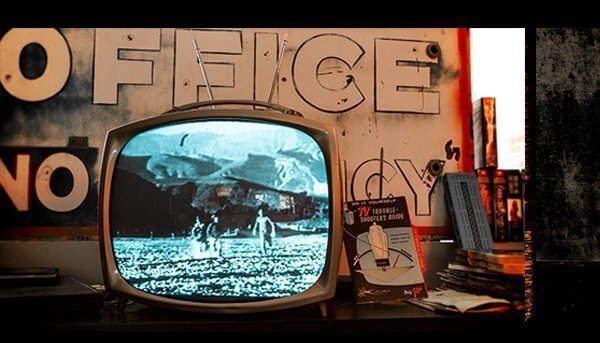 Making things up and why I do it

As a writer, you’d think I’d have a lot to say. That so many months wouldn’t have gone by between newsletters.

I do have plenty to say, but all of it is made up. I find real life stuff hard to write about or even boring––at least when it comes to my own life. Of course, other people’s stories I find ridiculously interesting, especially when they are told over a coffee, wine or beside a firepit.

But recently, as I sat in the lobby waiting for my car to get lubed, I had a thought. A few actually.

I was reading Neil Gaiman’s, The View from the Cheap Seats. I rarely read non-fiction. But he is one of my favorite authors. I made an exception. He was talking about the importance of libraries, reading, and daydreaming.  You see why he’s my dude?

So, I’m reading and glancing at the TV every once in a while. There’s a talking head for a news anchor and the headline of another shooting somewhere in the nation. I couldn’t hear him. I didn’t have to.

I watched the news with no sound.

A lady beside me wore a bright, flowered mumu dress with a stain down the front. You couldn’t miss it. The dress or the stain. She answered her phone. She talked quiet and calm, repeating the same sentence three times. I’m getting the car looked at, she said. Not once did she sound irritated. She didn’t raise her voice. Just repeated it until the person on the phone got it. I love you, honey, she said and hung up.

I could hear the truth in her voice.

A man around my age, wearing board shorts and a baseball hat was having a conversation with the man behind the counter. He was using his outside voice, going on about engines. Saying, how when he was younger he could look under the hood and figure out the problem. His phone rang. He answered it in the same volume as before, then went outside where the setting would match his voice.

My opinion of him went up slightly.

And the TV, it said they still didn’t know how many victims, if any. The NRA said stuff. The news anchor said stuff.

And in my book, I read, “The world doesn’t have to be like this. Things can be different.” Sure, Mr. Gaiman was talking about a world created in books––but why not take it into real life?

The words, ‘Second Amendment,’ showed up on the screen.

This was the moment where everything in my small world collided; the news, the people waiting in the lobby, the words I read and the ones I’d overheard…and of course, my imagination.

I am a fiction writer. I like to take certain liberties. So, here’s my thoughts…

What if the second amendment was changed to ‘you have the right to bear stories.’ No, it doesn’t really roll off the tongue but let’s just try it out.

What if, before staring down the smoking gun of disagreement, or judgment, or misunderstanding, everyone would have to tell a bit about themselves. Tell their story. Each of us would have to listen to the other, really listen not just fake listen. Could that change the outcome of a situation?

What if we’d known that the woman in the stained mumu dress had told her husband (who has dementia) not an hour ago, that she was going out to have the car looked at was running a few errands. How she left the house in a hurry because the nurse they hired could only stay for two hours. And thank the good Lord, there was a coffee shop nearby. She got one with chocolate and whip cream––the real kind. She’d tell us she was tired. More tired than she can remember being. Maybe she vowed to tell him, I love you, as much as she could so he wouldn’t forget. And if he did forget, she’d remind him again.

And if the man outside had told us his story, we would know that his brother had called him in California to tell him their dad was in the hospital––and it was serious. He flew out on the first flight he could get. And while borrowing his brother’s truck to make a house run from the hospital, the engine light went on. He would tell us that he knows it’s annoying as hell but when he gets nervous, his voice comes out all loud and he just can’t seem to shut up. And how that call, the one he just got standing in the lobby, was his brother telling him to take a cab if he needs to, just get back.

It made me wonder if we knew each other’s story (even just a little) before acting or reacting, then maybe empathy would become part of the discussion. Perhaps we’d realize that everyone out there is a ‘me’ in one way or another.

A big black truck pulled up to the curb outside the glass door. The man mouthed a thanks, then pulled away, still talking on his phone.

The woman beside me sat sipping her coffee, watching the same news I was.

I wondered if knowing which lens people look through would change how I see them? Or how I would respond to them? Maybe it wouldn’t. Who knows. Sometimes the more we know about a person the less attractive they become––but that might be a topic for another day and another oil change.

Of course, I totally made up the above-mentioned scenarios. It passed the time. But more than that, it made me imagine a better world. One where all of us could be heard and hopefully, understood. One where stories not only expanded our world but made us want to be better people and hopefully, better to each other.

So, what’s my point here? Here are a few possible takeaways;

I do know this, that Mr. Gaiman’s words are true in fiction and in life, the world can be a better place. It’s up to us to figure out how then go do it.