The small alien clutched the ticket in its hand and danced from one limb to another as it waited in line next to its guardian. They had come early, long past feeding time, but neither seemed to notice the growing hunger in their guts. The guardian flashed multiple rows of teeth at the alien behind them who couldn’t seem to keep its three-clawed arms to itself.

“How much longer?” the small alien asked in guttural clicking sounds.

“Not long now. I told you the exhibit would be busy. This is the first Live Human show we’ve had,” the guardian said. “Remember, they might not be as exciting as you’d think, what with their strange noises and hairy bodies. Some have said they are a horror to look upon, but they tend to sleep a lot.”

“I won’t be scared, I promise,” the small alien whispered. It nearly tripped on its back tentacles in its hurry to take a turn at the window. Its large eyes wouldn’t, couldn’t blink as it stared through the tempered glass and into the caged environment created for this show. Its guardian took a place at the next window.

Inside, three humans; a woman, a man, and a young man child huddled together so tightly they seemed as one creature. The small alien pressed its flat nose against the glass, hoping for a smell of the humans. But there was no scent, and the humans didn’t move. Not until its guardian tapped, and then banged its thick knuckles against the window.

That’s when the exhibit got lively. The one labeled ‘man’ untangled its strange four-limbed body from the others. Stumbling, the human raised a bony limb in the air and charged at the windows, his flattened teeth flashing, his grotesquely hairy head lolling from side to side as fluid spewed from his mouth.

The man’s screeching blew through the speakers, startling the small alien who jerked back from the window. Human limbs hammered against the thick glass between them. Bang. Bang. Until the glass ran red.

Inside the cage, a blast of high-powered steam blew from the ceiling, forcing the human to the floor where he scrambled backward on all fours. Back to the rest of his species. They howled and clawed and shook.

The small alien scuttled to its guardian, nuzzling into its layered folds for protection as they made their way out to the main park. It took a turn of the moon and a snack of candied lizard to calm the small alien. They said little on their way back to the pod. And for months after, the small alien’s dreams were haunted by screeching, four-limbed creatures with pale eyes and flat teeth. 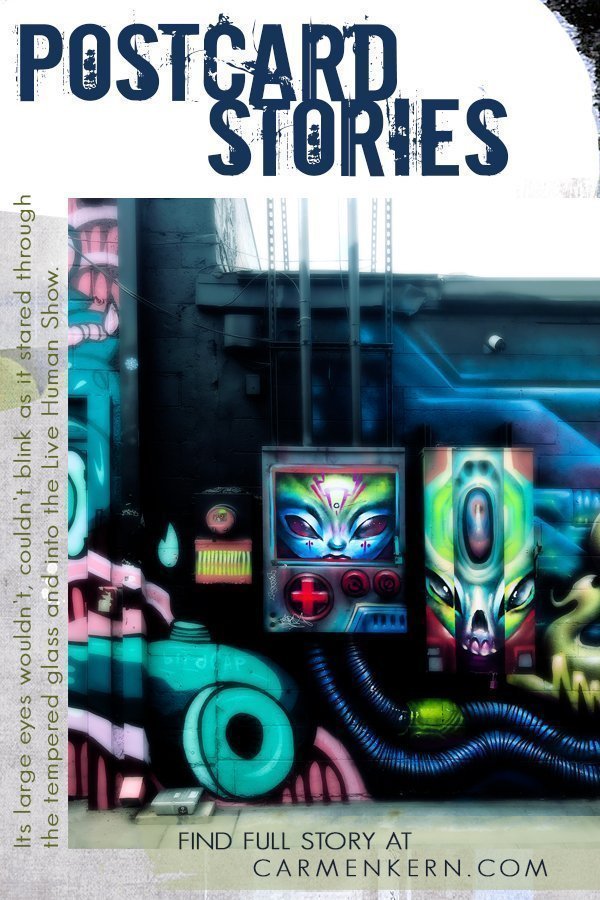